Take a seat,grab a brew this could be a long ride.

My training over winter has all been aimed at this event,I had opted not to run a spring Marathon this year and instead try my hand at my first ‘big’ ultra. I have run a few 50ks before but they are really only marathons with a few wrong turns right??

The training had been good,not perfect but non ever is.It was however certainly better than the weather had been in the weeks running up to the race!

Registration was in  Waverton village hall on the friday evening and after a quick kit check i had my number and obligatory mug shot.

After grabbing my number i had a quick catch up with my mate Charlie Sharpe,If you don’t know Charlie he is a very talented ultra runner and coach with a 100 mile PB of 13.58! His site is HERE.

Charlie had been on course during the daytime helping mark the final section and knew my intention of wearing roadshoes,he strongly recommended that i didn’t as it was a tad muddy out there!

Race morning came and it had rained hard all night long.The drive over to the start had me driving through flooded country lanes,Bearing this in mind and Charlie’s advice not 12 hours previous i parked up and took my Inov8 roclite out of the boot and put them on my feet,shoes designed for mud and trail running.

I lie,i kept my road shoes on as obviously i knew best!!!

After meeting with some clubmates that were also taking part and exchanging some nervous pre race chit chat it was time for the off!

The first five miles or so was good runnable country lanes down to the river Dee and i thought i had absolutely made the right shoe choice as as soon as we hit the river it would be good trails mixed with tow path just like in the middle of Chester. WRONG! here started the mud,while nothing to bad a trail shoe would definitely shored up my grip (although a guy in trail shoes in front of me nearly did a backflip just before cp1).

I only stopped at CP1 to get my number checked and trotted on my merry way.

Between that and CP2 we had a mix of muddy fields and decent track past Chester Racecourse and despite it starting to rain i felt relaxed and excited for the day ahead.

CP2 my wife surprised me,coming out to cheer me on and take some photos,i felt a little guilty i didnt stay to chat but i was in the zone.

The next section was along the Shropshire canal and some good paved towpath let me get back into a stride,a touch too quick than what i wanted to do but i was already a way behind my goal as i hadn’t taken the mud into consideration. I decided rather than blow up that i would re adjust my goal and accept that i can’t control the weather.

CP3 was probably one of the best i have seen,only rivalled by maybe the The Hebden ,the ladies couldn’t be more helpful,refilling my water for me and making sure i ate (i usually rely heavily on gels but took a piece of malt loaf to be polite,it was lovely btw). My wife had managed to get over as well and made sure i was ok.i asked her to get me some socks ready for CP4 as my feet had started to become sore from 3 hours in the wet. 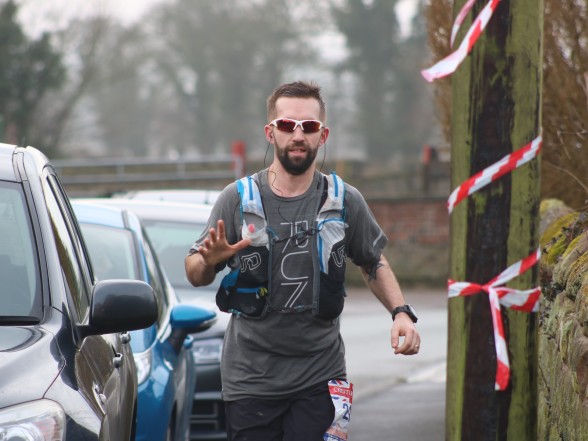 CP3 and the music was on to drown out the squelching from my shoes!

The start of the second half greeted us with the start of the courses climbs,nothing too steep or technical but enough to make the route interesting,i really enjoyed this section and the the descent from Helsby hill was great fun !

Meeting my wife at CP4 for the final time before the finish i decided not to change socks as i knew i had a couple of blisters and i didnt want to cause more damage by removing socks and possibly popping them. So a quick top up of gels from Deb and half a can of red bull i was ready to go,it was at this point that she told me that i was maybe in 10th or 11th!

Off i rocketed to catch the gent who had just passed me at the CP,missed the turn for getting back on the trail and had to be chased down by a support marshal!

I wouldn’t mind but i recced this section Sat afternoon!!

The next section saw us join the Sandstone trail up to Delamere forest and it also marked the furthest i had ever ran in a single event.(i only went to 31 miles in training due to recovery time).

At the Delemere CP i met a runner i know from a local club and we decided to run together home after finding out that we were indeed in 6/7th position respectively.

(I had felt really good through Delemere and as it was really well kept trail managed to get some decent running on and had overtaken a few runners) . 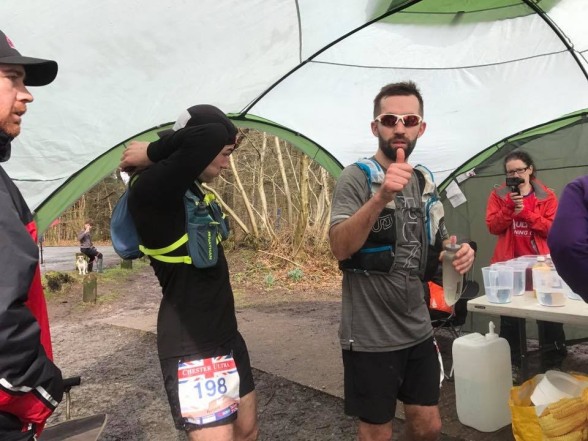 The next 10 miles became a bit of a blur as we chewed the fat and put the world to rights one boggy field morphed into another and a couple of electric fences kept us on our toes!

(Some pics of the course from the Chester ultra facebook group below).

I should of packed XC spikes!

The final CP marked around 8 miles to go and we could just see a runner closing us down.The kind folks at the CP informed us not to hang around and i repaid them by covering them in my last sachet of tailwind! Only i try pouring tailwind INTO a tailwind! once again sorry guys!!

The final stretch was on a canal and i was secretly looking forward to it,you see i like canal running,they are flat well paved and you can get some decent running done on them.

The shropshire canal had missed the bloody memo!

Our section of canal was grass and mud,and at that my secret weapon had been neutralised, i was reduced to nothing more than a jog for fear of slipping into the canal never to be seen again.

I was hurting now and with only a few miles left a top ten finish was guaranteed i just had to keep pushing forward. Looking over my shoulder i spotted the runner from the last CP and he was gaining…..Fast.

Just like every good horror film,every time i looked round he had gained that little bit more and i knew it was now only a matter a time before he came sailing past!

Jumping off the canal with 400m to go I was moving at what felt like a full sprint, the finish in site we crossed the line in Rob 6th, me 7th (results have us joint 6th)with the mystery runner finishing not 30 seconds afterwards!

The sprint for the finish !

All in all i loved this event and i think on a dry day there is a potential for some real good running,I may have to go back next year and test my theory!

Wayne and the whole team at GB ultras did a fantastic job from sign up to finish,The course was marked brilliantly,probably the best i’ve seen and Wayne really could not do anymore for the runners at the event.

Watch- My trusty Fenix 3 with Garmin etrex as nav backup